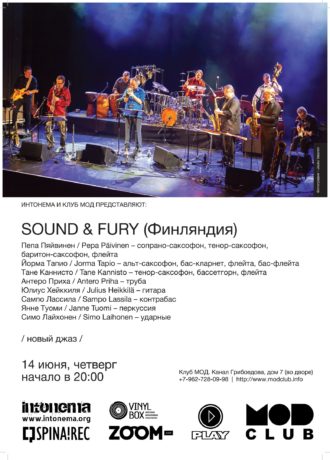 Sound and Fury led by Edward Vesala was one of the most praised, distinctive and musically powerful creative music groups in Europe 1986-99.

At spring 2010 the original horn section, Kannisto, Päivinen, Riikonen and Tapio with guitarist Jimi Sumen decided to put the band together for a 10th anniversary memorial concert of the former leader Edward Vesala and make a short tour in Finland. Sampo Lassila (member of the band in the late 80’s) came on bass, pianist and the arranger of Vesala’s music, Iro Haarla (being busy with her own band) was replaced by guitarist Julius Heikkilä. Ilmari Heikinheimo came on drums and Hannu Risku on percussion. Heikinheimo was later replaced by Simo Laihonen on drums. 2015 Matti Riikonen/tpt was replaced by Antero Priha/tpt (also once a short-time-member of S&F in the 80’s).

All the guys felt great joy in playing together and shared a mutual understanding that this music is very important – perhaps more than ever – to take out and play to the world. This music gives the player possibility to express fully himself as he is now – with all the conscious and unconscious emotions. It demands the player to be in this moment. That only makes this music contemporary, fresh and happening-now.

The musicians also decided to add their own textures and improvisations to the gigs.

Vesala’s music (arranged greatly by his former wife pianist/harpist Iro Haarla) transcends the boundaries of jazz, embracing equally classical, rock, tango and folk traditions. The remote beauty of Finland is evoked at the heart of the music, together with importance of magic and myth in Finnish culture. Vesala’s music somehow achieves a seemingly impossible mixture of complex textures, melody, emotional expression and sheer joy!

This music takes the listener on a gripping musical adventure, juxtaposing pulsating tunes for horns and percussion alongside works for experimental guitar or lush orchestral textures. At times harsh and others achingly beautiful, this music is sure to be both riveting and rewarding for anyone with catholic musical tastes.